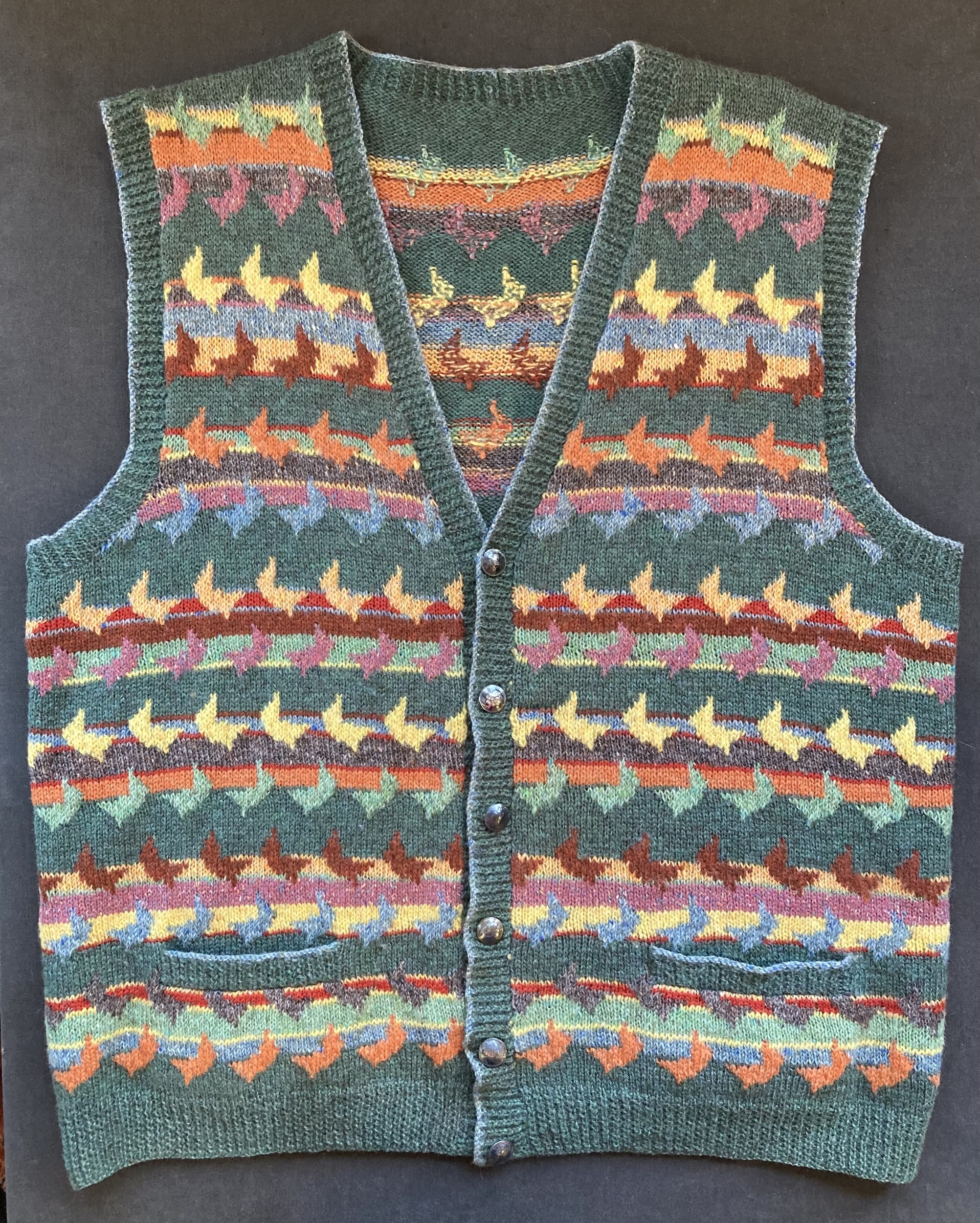 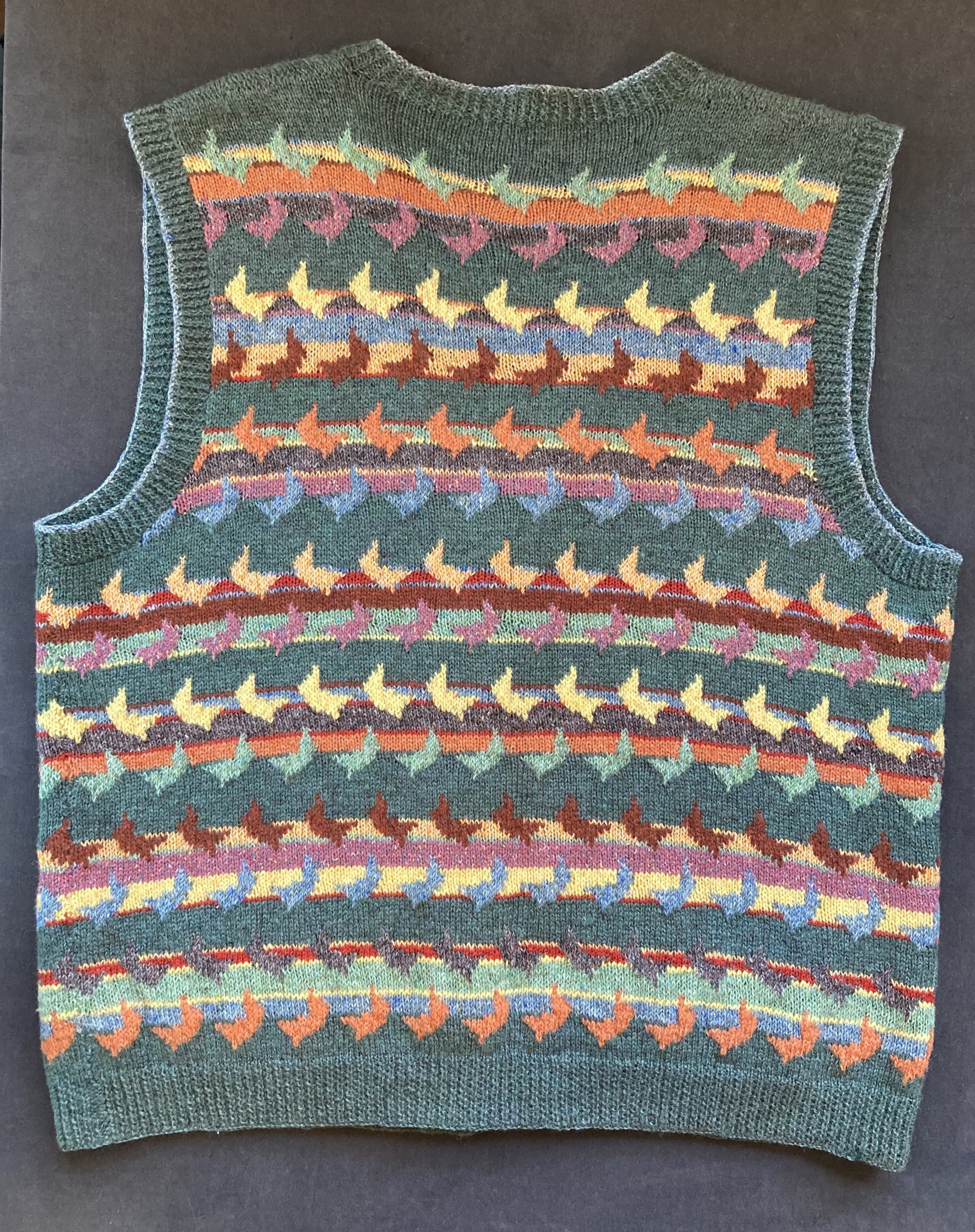 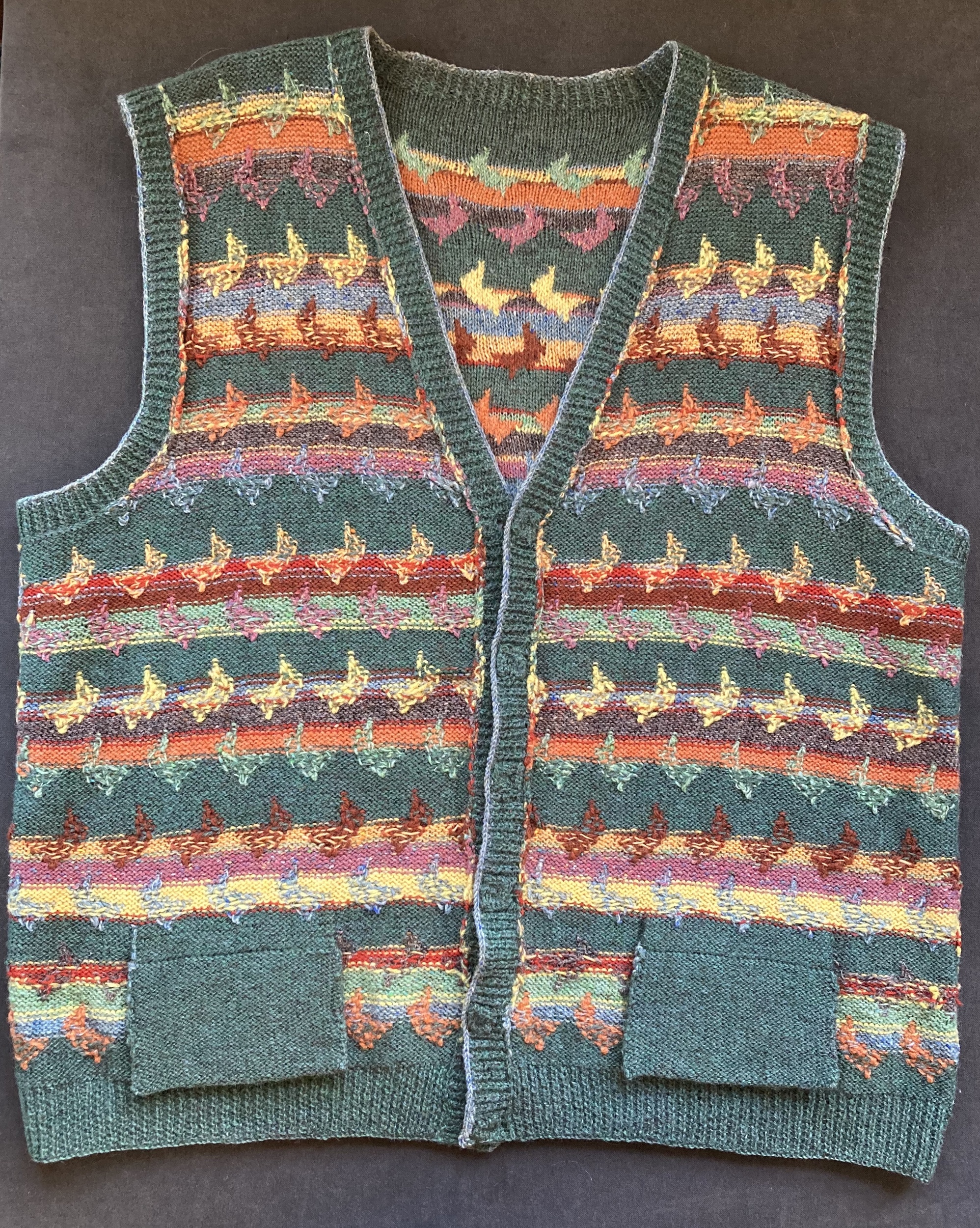 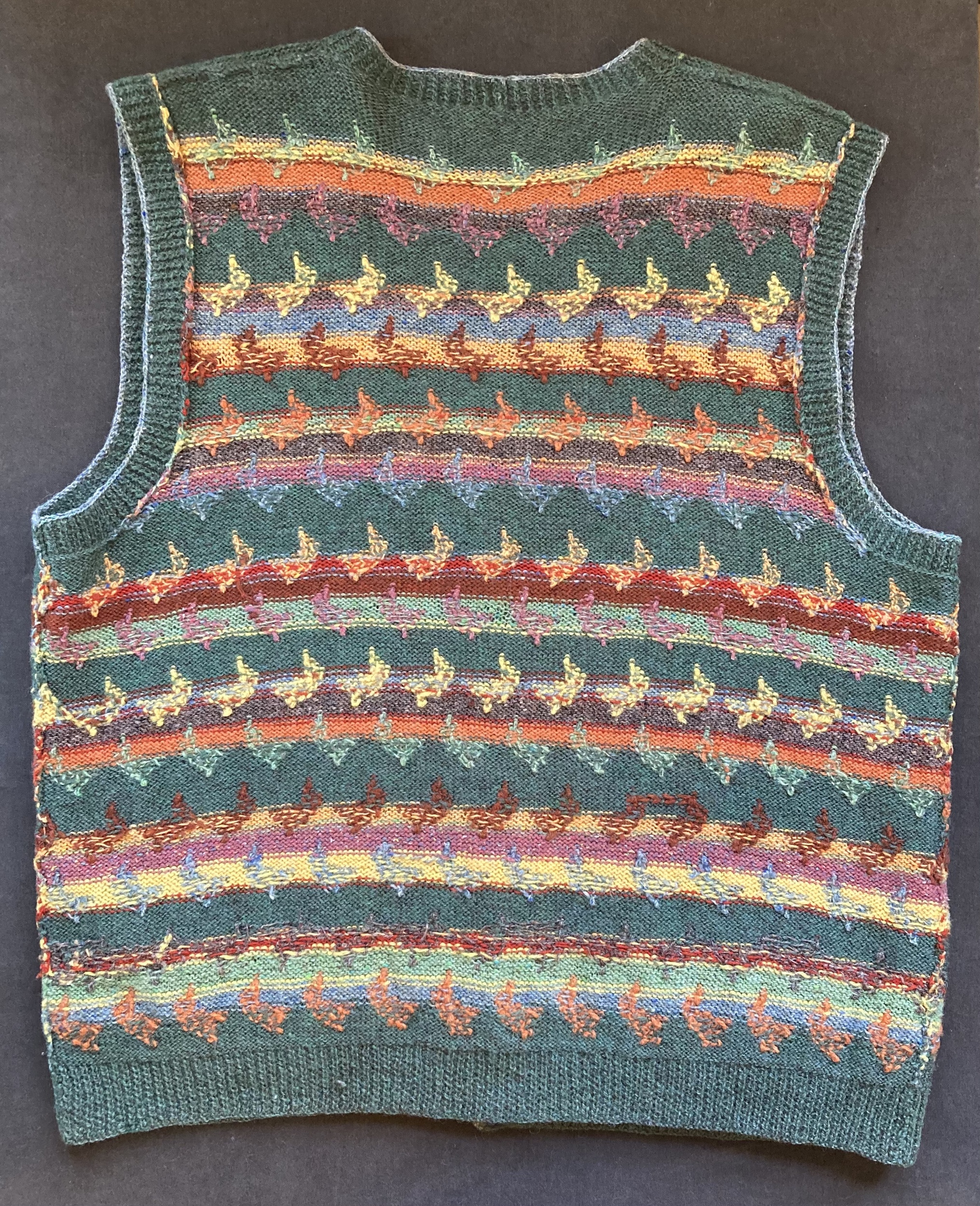 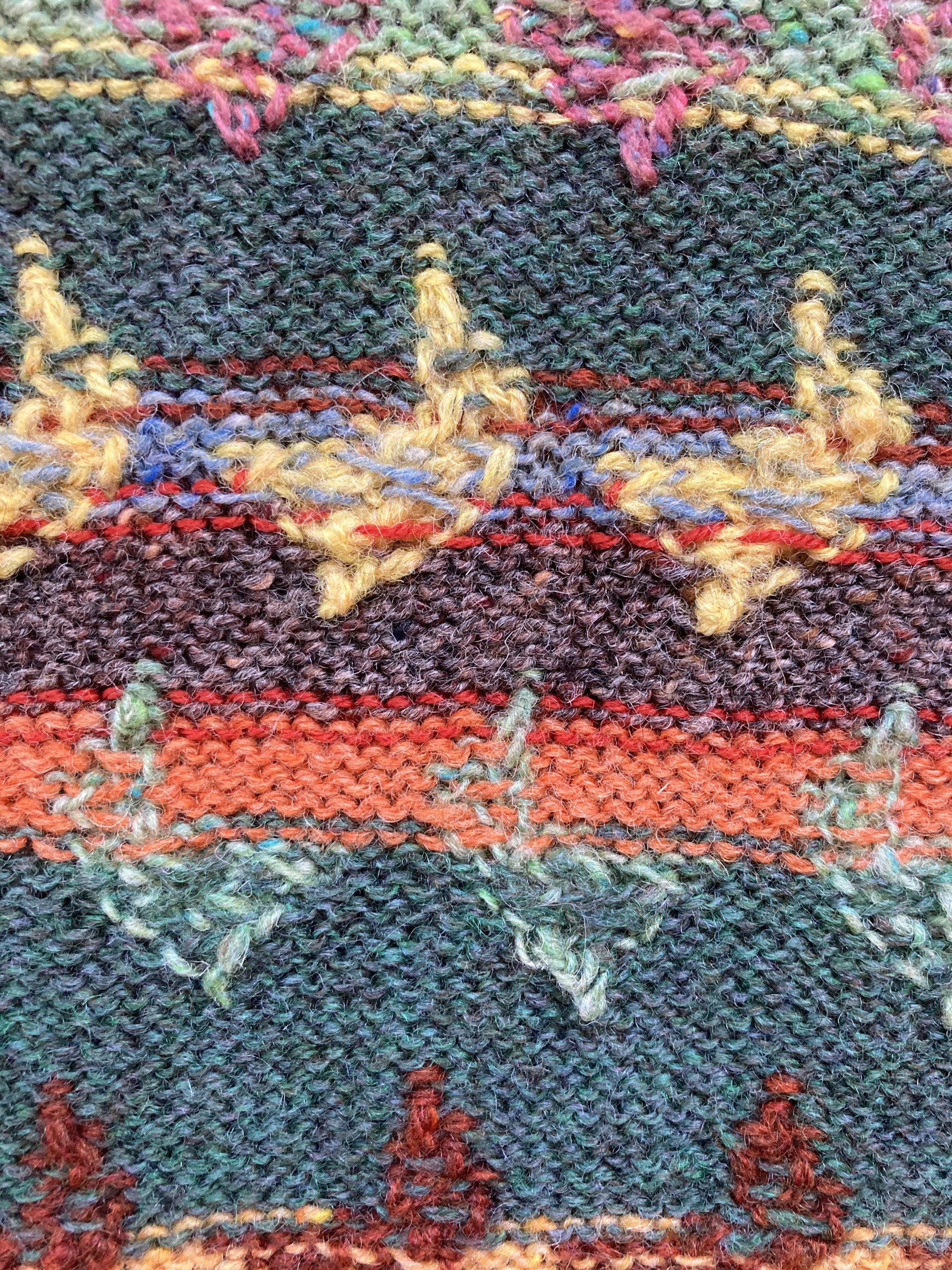 Story:  In 1991, I knitted this vest for my boyfriend, now husband of 28 years.  It was a challenging project, with more colors and more finishing details than I had previously undertaken.  Starting in late summer, I knitted along diligently, but was sick during the holidays and couldn’t complete the vest before we exchanged holiday gifts.  Nevertheless, like so many of us have done and still do, I boxed and wrapped the unfinished pieces carefully, eagerly anticipating his response.  On opening his vest-to-be, my boyfriend made a number of nice, thoughtful comments, but he was much less enthusiastic than I had hoped.

I handed it to him a few weeks later, finished, and his face lit up: “It’s done?  I can have it?”  When I mentioned my concern that he didn't like it, he said, “Well, I’ve gotten a few knitted things in pieces over the years, and usually, after I open them, I never see them again, so I find it’s best not to get too excited about unfinished projects!”

Design History:  UK designer Sasha Kagan, (https://www.sashakagan.co.uk), created the vest pattern and published it in an early booklet of Rowan sweater designs that I cannot now locate.  Sasha Kagan described this same design, called “Leaves,” as “based on a Fair Isle pattern” on pp. 81-82 of The Sasha Kagan Sweater Book: 48 Beautiful Handknits by a Top Fashion Designer, published in 1984 by Ballantine Books, New York, ISBN #0-345-31871-4.

The instructions specified using the intarsia technique for the colorwork, with the back and two fronts knitted separately and later seamed at the sides.  The horizontal stripes were straightforward enough to knit this way, but I knit the hundreds of little leaves with separate strands for each, tying each one off at both the beginning and the end, a process that would have been made easier by using the stranded colorwork techniques typical of traditional Shetland and Fair Isle knitting.

In the 1990s, colorful sweater designs were very popular, however, most designers and pattern publishers recommended using intarsia even when stranded knitting would be faster and more convenient because most kntters were not familiar with "knitting in the round" and "steeking the openings," two essential elements of traditional stranded knitting.  Today, knitters are much more familiar with the history and techniques of stranded knitting.  This shift occurred later in the 1990s as designers like Alice Starmore, Ron Schweitzer, and still later, Kate Davies, among others, as well as yarn designers and manufacturers like Jamieson & Smith of Shetland, and Betty Lindsay and Bonnie Hassler of Yarns International in Bethesda, Maryland helped to popularize these traditional materials and techniques.

Notes:  This project reminds me how love inspires so many of our most creative and adventurous feats in handwork and in life!